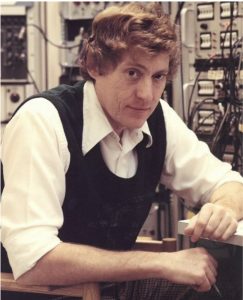 Professor Jacob Schaefer in the laboratory

Jake was the pioneer of CP-MAS, REDOR and many other technical developments for high-resolution solid-state NMR, now used world-wide. He applied these techniques diligently to the elucidation of structure and dynamics in complex materials such as biosolids and synthetic polymers, which are not amenable to diffraction or solution-state NMR measurements.

We miss him greatly and our thoughts are with his family and friends.

Professor Jacob Schaefer, “Jake” to all who knew him, passed away on June 27, 2022. He was 83 years old. Jake was born in San Francisco but spent most of his youth growing up in Chicago and Cleveland. Jake’s father and grandfather, both of whom Jake was named after, were legendary billiards champions and inducted into the Billiard Congress of America Hall of Fame. Jake would go on to manipulate nuclear spins to great effect, yet he maintained an interest in putting the spin on billiard balls. Jake was an avid baseball enthusiast. He was a fan of the St. Louis Cardinals and Chicago White Sox. He attended Carnegie Tech (now Carnegie Mellon University) in Pittsburgh, Pennsylvania, and obtained his Ph.D. in Physical Chemistry from the University of Minnesota in 1964. Jake then joined the Monsanto Company in Creve Coeur, Missouri. At Monsanto, Jake had tremendous scientific freedom and launched into what would be an amazing journey in innovation and discovery with solid-state NMR. Among wonderful colleagues at Monsanto, he and Edward O. Stejskal formed a life-long friendship and long-lasting scientific collaboration. Jake became a Senior Science Fellow at Monsanto in 1980. He moved to the Department of Chemistry at Washington University in 1986 as the Charles Allen Thomas Professor.

Jake was an extraordinary teacher, colleague, collaborator and mentor to many friends around the world. He was a pioneer in the development of solid-state NMR and creatively tackled an enormously diverse range of atomic and molecular-level questions in chemistry and biology. Jake started at Monsanto on a mission to develop techniques for 13C NMR analysis of important polymers. He published the first 13C solution NMR spectra of synthetic copolymers in 1969 and the first magic-angle spinning with proton decoupling 13C NMR spectrum of a solid polymer in 1972. In 1976, he and Ed Stejskal reported their discoveries in combining magic-angle spinning and dipolar decoupling with cross-polarization, known now as cross-polarization magic-angle spinning NMR or CPMAS NMR. Their paper entitled “Carbon-13 Nuclear Magnetic Resonance of Polymers Spinning at the Magic Angle” was published in the Journal of the American Chemical Society in 1976 and, in true Jake Schaefer style, included interesting polymers—polysulfone [a synthetic polymer], a sample of ebony wood [blend of cellulose, hemicellulose, and lignan], and a carefully cut cylinder from an ivory billiard ball [ivory is rich in collagen]. This pivotal advancement demonstrated that solid-state NMR spectra with 13C at natural abundance could be obtained with high sensitivity and high resolution. The 1976 paper energized new avenues of research for characterizing complex solid materials. Fascinating details of the early developments of CPMAS have been preserved through Jake’s 2007 perspective article, “Schaefer, Jacob: A Brief History of the Combination of Cross Polarization and Magic Angle Spinning.”

Jake followed CPMAS NMR with double-cross-polarization NMR (DCP NMR) in 1979. He applied 1H/13C/15N DCP NMR experiments to tracking metabolism in soybeans and to detecting connectivities and crosslinks in insect cuticle. DCP NMR is a demanding experiment that requires stable sample spinning, precise control of radiofrequency (rf) amplitudes, and a triple-resonance probe. Jake, Ed Stejskal and Bob McKay made unique contributions to hardware development to meet these technical challenges, including their earlier introduction of quadrature phase cycling (1974) to eliminate spectral artefacts. Perhaps the development of transmission-line probes was the most recognizable contribution, which included double-bearing rotor designs. Their probes were able to handle very high power and have exquisite rf isolation between channels by taking advantage of voltage null points characteristic of transmission lines. Bob McKay moved with Jake to Washington University, and every spectrometer in Jake’s laboratory was equipped with a custom rf controller that eliminated drift of rf power in the probe. They gladly shared designs with other research groups interested in building their own probes and rf controllers. Advances in solid-state NMR methods continued to emerge regularly in Jake’s laboratory at Washington University, which were catalyzed by the collegial atmosphere in his well-equipped laboratory. An example is rotational-echo double-resonance (REDOR) NMR introduced in 1989 by Jake and Terry Gullion to detect and accurately measure dipolar couplings between heteronuclear spin pairs.

Jake’s research branched into structural biology in the 1980s. Jake was marvelously adept at designing and utilizing selective isotopic labeling strategies and the perfectly suited NMR experiment to unravel structural details in complex samples. Many of his pursuits were in strong collaborations with experts in biology, drug development, polymer science, and insect science, and he immersed himself in these fields. He would attend meetings beyond the usual realm of his expertise and reach out to key experts. A selection of Jake’s notable accomplishments in the realm of biology includes determination of glyphosate degradation and glycine assimilation into proteins by bacteria (important for Monsanto’s development of glyphosate as an herbicide); bond connectivities and crosslinks in insect cuticle (lab members could always see the old insect specimens Jake saved in glass jars on a lab shelf); crosslinks in mussel byssus (with live mussels grown in 140 L saltwater aquarium tanks supplemented with separately 13C-labeled and 2H-labeled tyrosines for REDOR); determination of the microtubule-bound conformation of taxol (characterized by Jake Schaefer–style 90-day REDOR measurements) and other drug-protein binding site geometries (e.g., in lumazine synthase and factor Xa); as well as determination of modes of action of oritavancin and other glycopeptide and peptide antibiotics in bacteria. Jake also advanced the thesis that, due to photorespiration, some plants would be more susceptible to drought under higher CO2 conditions brought about by climate change (he grew 13C, 15N and 17O enriched soybean plants on the roof of the WashU Chemistry Building).

Throughout his career, Jake maintained intense interest in analyzing polycarbonate and other glassy polymers. With excellently designed experiments, NMR data, and testable models, Jake and his coworkers and collaborators advanced the role of short-range local order in polymers and provided evidence that polymer-chain packing and dynamics underlie mechanical properties. In his final paper (just accepted in the Journal of Chemical Physics, July 2022) he wrote: ‘Our conclusions appear to resolve the 50-year disagreement between the “random coil” and “local order” schools of thought on glassy polymer structure and physical properties.’

Jake was a true scholar, and his scientific contributions are inspirational. He was full of thought and his problem-solving efforts were all marked by elegantly designed experiments and rigorous data acquisition to measure and extract important parameters that one could build on. He had a natural wisdom in so many areas, yet he was rather modest and had a wonderful sense of humor and kindness. Jake will be greatly missed as a kind and inspiring mentor, dedicated teacher, colleague, friend, collaborator, and wonderful individual.